SCHOOL TRIPS IN LUNIGIANA: PILGRIMS ALONG VIA FRANCIGENA

From Berceto, in the Apennine mountains, to Sarzana, small ligurian village: a journey in a millennial history. The itinerary along the places written by Sigeric during 10th century, tells the history of this land through guided tours, meeting with little associations of the territory in order to get in touch the young people with this little corner of Italy.

Day 1 – Via Francigena in the mountains: Berceto and Passo della Cisa.

Meeting with the guide in Berceto, a small medieval village in the mountains of Apennine National Park, crossed by pilgrims since the Medieval Age. We will visit the town, the ancient walls of the castle and San Moderanno Dome, decorated with a medieval portal. The itinerary continues with the walking tour along Via Francigena, from Molinello to Casalina, where the students can see one of the oldest bridges along the ancient road. The walking lasts 2 hrs. Stop for lunch during the day. 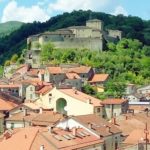 Meeting with the guide in Pontremoli. During the morning, guided tour of Villa Dosi Delfini, a Baroque masterpiece in Pontremoli, built during 18th century by Dosi Delfini family. They were merchants and became rich so they could use money in the artistic field. With this mansion, the Baroque period starts in Pontremoli: palaces and churches of the old town were decorated by great artists from all over Italy.
Free time for lunch.
In the afternoon, guided tour of the town centre and the Piagnaro Castle, with its Museum of Stele Statues, which are prehistoric monuments found in Lunigiana valley. They dated back to the 4th millennium B.C.

Day 3 – Via Francigena along Magra River: from Filattiera to Filetto. 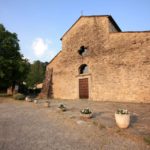 In Magra Valley, Via Francigena crosses old and charming villages, on the hills and along the streams. Along the walking, you can see monuments which were very important for the pilgrims: Sorano Parish Church, San Giacomo Hostel, San Giorgio Tower, the fortified hamlet of Filetto and the chestnut wood. A journey among nature, history and traditions.
Meeting with the guide in Filattiera and treasure hunt with GPS in a Natural protected area, in order to learn something about cartography and orienteering
After lunch, trekking along the Via Francigena, until the fortified hamlet of Filetto: from the Sorano Parish Church the path reaches Filattiera village, where there is the ancient San Giorgio tower. From Filattiera, the path goes through chestnut woods of Lunigiana, with magnificent views over the Tuscan Emilian Apennine. After two hours of walking, we reach the old wood of Filetto, where people found prehistoric monuments called Statue Stele.

Day 4 – Via Francigena between Liguria and Tuscany: Sarzana and Luni.

Via Francigena crosses also Liguria, in the medieval village of Sarzana, a small fortified town which was conquered by Pisa, Lucca, Genoa and Florence and defended by huge castles.
Meeting with the guide in Sarzana. The tour starts from Porta Romana. We walk along the village and we will visit the most important monuments of the town, which are all along the medieval street. Visit of Firmafede fortress, built by Medici family, the Cathedral with the Cross of Mastro Guglielmo, the oldest painted cross of the Italian art, and Sant’Andrea Parish Church.
After lunch, visit of Luni, the old roman colony, which is not so far from Sarzana. We will visit what remains about roman houses, temples and the amphitheatre. Luni was the main port of the Mediterranean see during Roman Age.

This itinerary is available for groups of minimum 15 students and maximum 50 students.