Skip to content
Home » Where we are – La Lunigiana

Our offices are at the heart of Lunigiana-Tuscany, in Villafranca and Filattiera.

Lunigiana is the northern part of Tuscany, at the border with Liguria and Emilia-Romagna, surrounded by beautiful parks.

We offer guided tours and tourism services all over the historic Lunigiana, among exceptional sceneries and landscapes: medieval villages and castles, the Apennines National Park and Mab Unesco reserve, Apuan Alps Park and Carrara marble quarries, Versilia, Gulf of the Poets and the Cinque Terre National Park.

The historic Lunigiana covered the territory of the medieval  diocese of Luni, ancient Roman city founded in the 2th century B.C. at the mouth of the River Magra, at the border between Tuscany and Liguria, corresponding today to the Provinces of Massa Carrara and La Spezia.

This area has always played an important role throughout history as getaway between Northern Italy and Europe to the Mediterranean Sea, and in the Middle Ages as crossroads of important pilgrimage routes such as The Via Francigena, The Abbot’s Way and the Holy Face.

Today Lunigiana still preserves its charm of bygone times, far from the hectic mass tourism, where you can discover medieval villages and castles, fascinating mountains dotted with century-old woods and pristine rivers, but easily accessible both by car and train and well connected with the major art cities and attractions of Northern Italy and Tuscany. 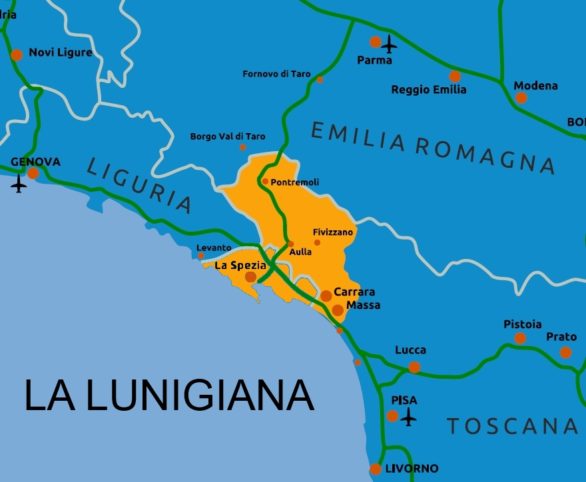 HOW TO GET HERE: